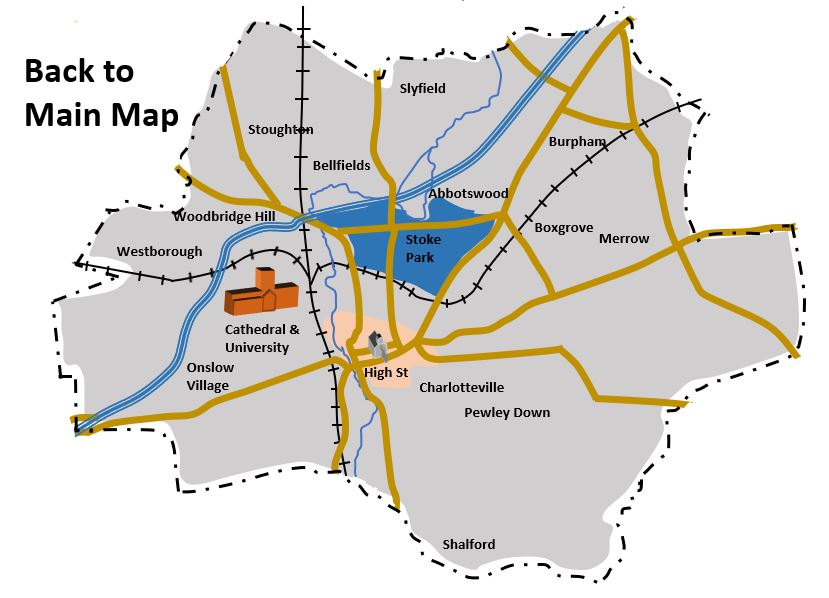 Stoke Park dominates this area. It was owned by the Onslows of Clandon House and a target for housing developers until the Council rescued it for the people in perpetuity in 1924. Burchatt’s Farm Barn, at the eastern end is one of the farms that worked the land. (It is owned by the Council but leased to a chiropractor).At the other end of the park stood Stoke Park Mansion demolish in the 1970s to build the college buildings. The kitchen garden remains as tennis courts and the delightful boating lake and paddling pool were laid out in the 1920s in the then fashionable Japanese style. There is now also a crazy golf course and children’s playground.

The lido (opened 21st June 1933) is a well preserved and a popular summer recreation. It was built by unemployed workers funded by a Work Fund set up by the Mayor , William Harvey in 1932 at the height of the Great Depression. (1)It was possibly the first of its kind in the country and allowed the employed to support those out of work.

Not far away is the Spectrum sports centre built in the 1990s and claimed to be one of the best leisure centres in the country. Next to the lido is Stoke Church and several buildings remain from the original village making it possible to imagine this area before it became part of the town

Running across the north of this area are two by-passses. The first is Ladymead opened in July 1934 (2). Unlike Surbiton and Kingston where new arteries became a magnet for Suburban sprawl, in Guildford the Council was able to control the development either side of the road. It was lined with a dairy, houses, car showrooms, a bus garage and fire station. All have now been replaced by out of town retail and offices.

The second by-pass was the new A3 built in the 1970s. To the south of ladymead are houses on the site of two country houses that once stood on the edge of the town. These were Woodbridge House and Woodbridge Park.