Guildford is one of the most prosperous towns in the south-east and yet it has the feel of a country town. It has a cathedral and one of the best universities in the country but it is not a city. It is 30 miles from London but has escaped overdevelopment and is surrounded by rolling hills and beautiful countryside. How did it pull off this trick and can it continue? These questions lie at the heart of Guildford’s past and future.

From early times Guildford was the largest town in Surrey and owed its importance to its position at the junction of two routes. It is positioned where the river Wey cuts through the North Downs and is on a major route between London and Portsmouth, a major naval base since the thirteenth century. It is also on an important east-west route across the North Downs above the heavily wooded and impassable Weald. This route was used by William the Conqueror following his invasion in 1066 and by later Kings travelling from London to Winchester

Guildford is a Saxon town. Prehistoric remains exist in the town centre. Also, Roman villas and temples have been found in the surrounding area. However, there is no evidence of a permanent settlement in the town before the 10th century. The earliest settlement was probably around St Mary’s Church, whose tower has been dated to 980s. The town became a burgh and its original shape is still traceable. The High Street formed a central street. North Street, known as the town ditch until the 18th Century, formed a fortified bank with Sydenham Road marking the southern edge. William the Conqueror added a castle on the edge of the town completing the shape of medieval Guildford. The original shape of the town was preserved until the 18th century and is clearly seen in the Richardson map of 1748. The town remained roughly this size until the arrival of the railways.

The High Street retains many buildings recalling the development of the town. Two medieval undercrofts and a thirteenth century synagogue recall the importance of the medieval Guildford as a wool town famous for “Guildford Blue” cloth.

In the seventeenth century Guildford gained prosperity from the Wey Navigation river trade. Today’s Guildhall is a symbol of the town’s wealth at this time. A century later, as road transport improved, Guildford was an important stopping place on the London to Portsmouth coach route. The High Street was lined with coaching inns of which the Angel Hotel is the sole survivor.

The arrival of the railway transformed Guildford and turned it into a commuter town for people working in London. At the same time artists and writers settled in the surrounding villages enjoying the rural atmosphere. But the two soon came into conflict as Guildford started to grow. Fortunately, the Borough Council, generous benefactors, and the creation of the Green Belt saved large areas of countryside close to the town. At the same time groups like the Guildford Society prevented the demolition of some of the most historic parts of the town.

So at a time when other towns were being transformed or swallowed up in the growth of London, our town managed to retain its identity. As a result Guildford retains the feel of a small town rather than an expanding city. Although much of the character of the town has been preserved Guildford has faced pressure to develop. Acting as a funnel for traffic travelling through the downs, Guildford has a major traffic problem which led to the notorious one way system that confuses many a visitor. The cathedral and university have created a modern enterprise district that is as large as the historic town.

Today history and technology sit side by side. As our last map shows most of central Guildford is a protected conservation area (yellow) filled with many listed and locally listed buildings (blue). But as the darker areas show, much of the town centre has been rebuilt since the Second World War. (The grey is residential). As a result Guildford has plenty of scope for development without having to compromise on its historic feel. Careful planning, height restrictions, gabled features and the use of brick have all save the town from taking on modernist feel.

But will it last? In 2016 Network Rail won an appeal to build an eight storey station complex twice as long and twice a tall as the old Debenhams. A precedent has been set that will allow others to argue for High Rise developments around the town. North Street and Debenhams are both prime sites about to undergo development. Can Guildford continue to pull off the trick that has made it one of the best places to live in the South East?

Back to Home Page 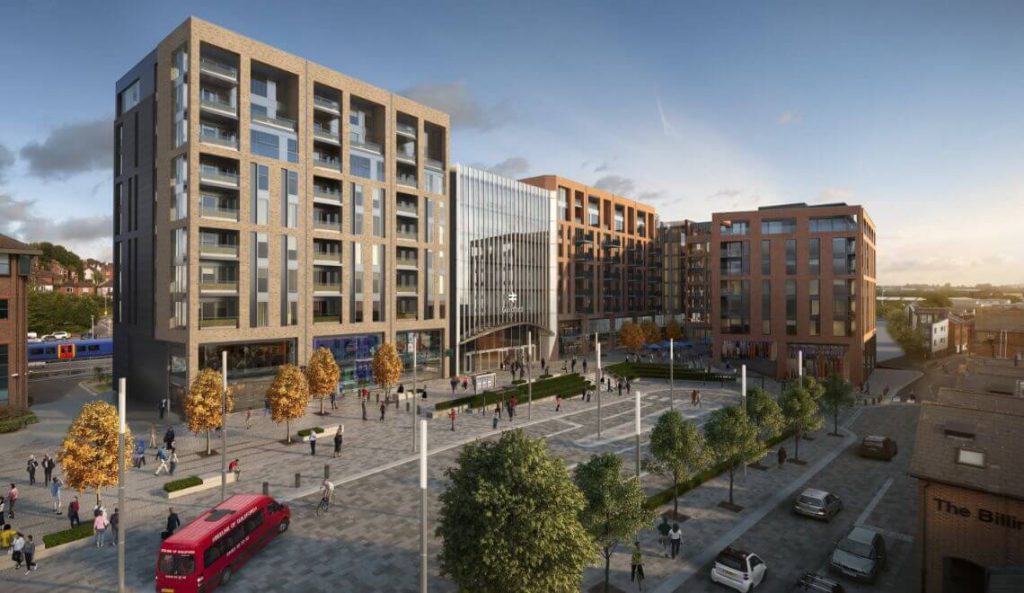